Dr. Chandra Batra, M.D. | Kara Thompson, DO - Role of Human Gut Microbiome in Health and Diseases and Updates in Medical Management of Obesity $24.00
Back to products
Next product Timothy Spruill – Disarming the Suicidal Mind: Evidence-Based Assessment and Intervention is digital courses, ebook, audio, not physical DVD CD ,.. You will recieve download links via Email and “Download” sector on Your Account. For check the screenshot or one module Demo, just leave a msg at “Contact Us“. 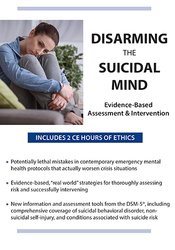 INTRODUCTION TO THE GROWING PROBLEM OF SUICIDE IN AMERICA

ASSESSMENTS/MEASURES TO AID IN DETERMINING RISK LEVEL — A COMPREHENSIVE STRATEGY

WHEN LOSING A PATIENT TO SUICIDE — REMAINING RESILIENT AND MOVING FORWARD

Timothy Spruill, MA, EdD, has conducted more than 3,500 emergency psychiatric assessments in one of Orlando’s busiest emergency departments as a consultant at Advent Health, where he is a founding faculty member of the emergency medicine residency program. Through his work with high-risk patients and his research in the area of suicidology, Dr. Spruill has developed an evidence-based approach to emergency mental health that urges progress far beyond the fragile gains of traditional (and contemporary) psychological triage.

His extensive experience conducting assessments and evaluations reaches back to his work in private psychiatric hospitals in the early 1980s. Dr. Spruill earned his Master’s degree in counseling psychology from George Mason University in 1977. After four years of teaching, he left for the applied world of a community psychiatric setting and pursued his Doctorate in counseling psychology at Western Michigan University. In addition to his ongoing consulting work, he returned to academia in 1991 to share his experience and extend his research capabilities. During his time with Andrews University and, subsequently, Advent Health, he has continued to collect data on suicide and conduct research in his chosen field of behavioral medicine. Since 2010, he has taught continuing education courses on the topics of suicide assessment, preventing medical errors, and violence. He has also presented his findings at numerous conferences, traveling as far as Cape Town, South Africa, to speak on suicide.

Non-financial: Timothy Spruill has no relevant non-financial relationships to disclose.