Rita Milios – Neuroscience and Brain-Based Therapy: Transformational Techniques for Your Practice is digital courses, ebook, audio, not physical DVD CD ,.. You will recieve download links via Email and “Download” sector on Your Account. For check the screenshot or one module Demo, just leave a msg at “Contact Us“. 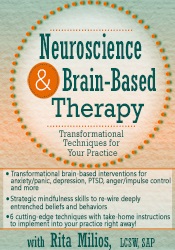 The How and Why of Brain-Based Interventions

Taking the Brain Off Auto-Pilot

Put it into Practice: Experiential Exercise # 2: Re-Boot Your Brain Technique for Impulsiveness, Fear and PTSD reactions

Put it into Practice: Experiential Exercise # 5: “Unhook” from Habit & Rewire an Auto-Pilot Response for Anger, Depression and Negative Self-Beliefs

Put it into Practice: Experiential Exercises # 6: Heart-Focus Exercise for Depression, Anxiety and Anger

Rita Milios, LCSW, SAP, is a psychotherapist in private practice, a Florida Qualified Supervisor and a Substance Abuse Professional. Her practice and her seminars for clinicians combine DSM-5® related strategies with unique “mind-tools” techniques that bridge the gap between traditional psychotherapy and holistic approaches. Rita has been a teacher of meditation, mindfulness and other mind-training techniques for more than 20 years, as well as a researcher and writer on cutting edge topics related to mind and behavior, including the use of brain-based science techniques. Her book, Tools for Transformation is valued by both clinicians and lay people for its easy-to-read introduction to “mind tools” strategies.

Rita is an internationally published author of more than 40 books and 100 articles for print and web, plus a management training video on positive thinking. Her book and seminar topics include mind/body wellness, personal transformation, creativity, recovery and bereavement. Rita has been featured on radio & TV as an expert on the mind and positive thinking, and has worked with psychologists and other clinicians to produce training materials for use with clients and teachers. She loves to present very interactive presentations that involve the audience throughout the entire day.

Be the first to review “Rita Milios – Neuroscience and Brain-Based Therapy: Transformational Techniques for Your Practice” Cancel reply
Shipping & Delivery