Michael H. Flynn – Texas Mental Health & The Law is digital courses, ebook, audio, not physical DVD CD ,.. You will recieve download links via Email and “Download” sector on Your Account. For check the screenshot or one module Demo, just leave a msg at “Contact Us“. 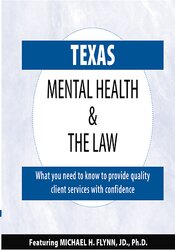 Michael H. Flynn, J.D., Ph.D., after more than 25 years in independent practice as a clinical psychologist, in 2008 Dr. Flynn became licensed as an attorney, as well. Since the middle 1980’s, in addition to general practice as a psychologist working with adults and couples, Dr. Flynn conducted over a thousand psychological evaluations and provided expert testimony for litigants, defendants, and agencies in matters of disputed custody, criminal defense and competency, personal injury, employment disputes, and testamentary capacity. Seeking to broaden his practice, in 2005 Dr. Flynn attended law school. He became a member of the State Bar of Texas in 2008.

Since becoming a lawyer, Dr. Flynn has ceased providing psychological services and limited his professional activities to the practice of law, assisting mental health professionals across the state of Texas, across a spectrum of legal matters including answering licensing board complaints, responding to subpoenas and depositions, handling business issues, and a variety of legal concerns specific to mental health practice. Dr. Flynn also represents clients in family law matters, and he offers mental health and law seminars throughout the state.

Dr. Flynn received his Bachelor of Science degree in psychology from Middle Tennessee State University in 1970, his Master of science degree and doctorate in clinical psychology from the University of North Texas in 1980, and his Juris Doctorate from Texas Wesleyan Uni-versity School of Law (Now Texas A & M Law School) in 2007. He has taught abnormal psychology, human development, and personality theory at The University of North Texas, Texas Woman’s University, and Holy Family College in Philadelphia, Pennsylvania. Since 2009, he has traveled around Texas and around the country teaching seminars in risk management and mental health law. See more at Dr. Flynn’s website, at michaelflynnjdphd.com.