Andrew Holecek - Dream Yoga $59.40
Back to products
Next product Harville Hendrix – Imago Couples Therapy with Harville Hendrix, Ph.D.: Proven Strategies for Helping Couples Connect, Heal and Grow is digital courses, ebook, audio, not physical DVD CD ,.. You will recieve download links via Email and “Download” sector on Your Account. For check the screenshot or one module Demo, just leave a msg at “Contact Us“. 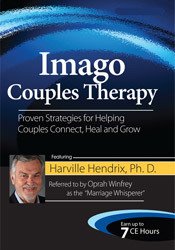 The Formation of the Imago & The Selection ProcessImago Dialogue

Harville Hendrix, Ph. D. is a clinical pastoral counselor who holds a Ph.D. in Psychology and Theology from the University of Chicago and is a former professor at Southern Methodist University. He is known internationally as the co-founder with his wife, Helen LaKelly Hunt, Ph. D. of a couples therapy called Imago Relationship Therapy. Together they co-founded Imago Relationships International, an international non-profit organization that offers training, support and promotion of the work of 2000 Imago therapists in 30 countries.

Harville is the author of GETTING THE LOVE YOU WANT: A Guide for Couples (which has sold over 2 million copies) and KEEPING THE LOVE YOU FIND: A Personal Guide, both New York Times best sellers. With Helen he co-authored GIVING THE LOVE THAT HEALS: A Guide for Parents, also a best seller, and RECEIVING LOVE: Transform Your Relationship by Letting Yourself Be Loved plus three meditation books, two study guides and a video for couples seen on more than 300 public television stations. Their books are published in over 57 languages.

Referred to by Oprah Winfrey as the “Marriage Whisperer?”, Harville has been featured on the Oprah show 17 times winning Oprah an Emmy for “most socially redemptive”? daytime talk show, was ranked in her top twenty shows and recently received the #2 spot for Oprah’s “Greatest Aha Moments.”? Harville has appeared on multiple television talk shows and is a sought after lecturer. For the past 4 years, his passion helped ignite a global movement to educate the culture about the value of healthy intimate relationships, which included working with the top Couples Therapists in the nation. Harville and Helen have been married since 1982, have 6 children and 5 grandchildren and live in New York City.

Non-financial: Harville Hendrix has no relevant non-financial relationship to disclose.