[Audio Only] EP85 Workshop 29 - A Demonstration of the Therapeutic Use of Deep Trance Phenomena - Ernest L. Rossi, Ph.D. $4.35
Back to products
Next product Esther Perel – Modern Love: Rethinking Intimacy and Sexuality in Couples Therapy with Esther Perel, LMFT is digital courses, ebook, audio, not physical DVD CD ,.. You will recieve download links via Email and “Download” sector on Your Account. For check the screenshot or one module Demo, just leave a msg at “Contact Us“. 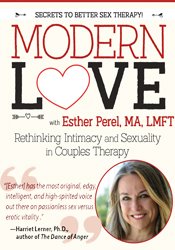 The Pitfalls of Modern Intimacy

Addressing the Awkward in the Therapy Room

Fluent in nine languages, the Belgian native is a practicing psychotherapist, celebrated speaker and organization consultant to Fortune 500 companies. The New York Times, in a cover story, named her the most important game changer on sexuality and relationships since Dr. Ruth.

Her critically acclaimed viral TED Talks (The secret to desire in a Long-term Relationship, February 2013 and Rethinking Infidelity .. a Talk for Anyone Who has ever Loved, May 2015) have collectively reached over 14 million viewers.

Esther’s innovative models for building strong and lasting relationships have been widely featured in the media across 5 continents spanning The New York Times, The Washington Post, The Wall Street Journal, Forbes, Le Monde, Ha’Aretz and The Guardian, The New Yorker, Fast Company, and Vogue. She is a frequent guest on radio and television shows including NPR’s “Brian Lehrer show”, “Oprah”, “The Today Show”, “Dr. OZ” and “The Colbert Report”. For more information about her educational programs and resources, please visit: www.estherperel.com.

Financial: Esther Perel is in private practice. She receives a speaking honorarium from PESI, Inc.

Non-financial: Esther Perel is a member of the American Family Therapy Academy (AFTA); The Society for Sex Therapy and Research (SSTAR); and the American Association for Sexuality Educators, Counselors and Therapists (AASECT).