Paul Scheele - Boundless Renewal $19.90
Back to products
Next product Debbie Joffe Ellis – 2-Day Rational Emotive Behavior Therapy (REBT) Comprehensive Course is digital courses, ebook, audio, not physical DVD CD ,.. You will recieve download links via Email and “Download” sector on Your Account. For check the screenshot or one module Demo, just leave a msg at “Contact Us“. 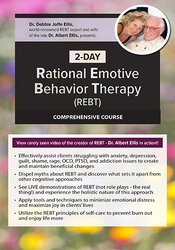 REBT’s Impact on the Worlds of Psychology, Counseling, and Therapy

What is REBT and Why is it so Beneficial for my Clients?

Methods and Techniques in REBT

The Holistic and Philosophical Nature of REBT

Debbie Joffe Ellis, MDAM, is a licensed psychologist (Australia) and mental health counselor (New York), and is affiliated with several major psychological associations and societies – including being a Member of the Australian Psychological Society, and an International Affiliate Member of the American Psychological Association. She has a doctorate in alternative medicine (MDAM) from the Indian Board of Alternative Medicine in affiliation with the World Health Organization, from whom she also received a gold medal (1993) in recognition of her service to the field of alternative and holistic medicine.

Dedicated to her husband, the great pioneering and remarkable psychologist Albert Ellis Ph.D., they worked together for several years giving public presentations and professional trainings on Rational Emotive Behavior Therapy (REBT), as well as collaborating on writing and research projects, until his death in 2007. She continues to present, practice and write about his groundbreaking approach of REBT.

She currently has a private practice in New York City, and also delivers lectures, workshops and seminars throughout the U.S.A. and across the globe.