C. Alexander and Annellen M. Simpkins – Hypnosis Intensive Workshop: Applying Clinical Hypnosis with Psychological Treatments is digital courses, ebook, audio, not physical DVD CD ,.. You will recieve download links via Email and “Download” sector on Your Account. For check the screenshot or one module Demo, just leave a msg at “Contact Us“. 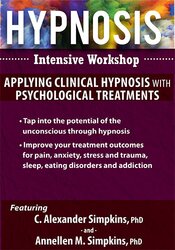 Day 1: Skill Building in Self-Hypnosis and Hetero-Hypnosis
Working with the Unconscious

How Hypnosis Affects the Brain 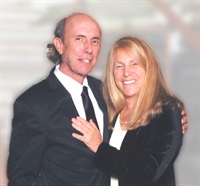 C. Alexander Simpkins, Ph.D. & Annellen M. Simpkins, Ph.D, are psychologists specializing in neuroscience, psychotherapy, meditation and hypnosis. Drs. Simpkins have been practicing psychotherapy for more than three decades; and have been researching and practicing hypnotherapy and meditation for four decades, studying hypnosis under G. Wilson Shaffer, dean of Johns Hopkins University, and Director of the Hopkins Counseling Center; hypnotherapy under Harold Greenwald, creator of Direct Decision Therapy; and indirect hypnosis with Milton H. Erickson and Ernest Rossi. They have taught their meditative and hypnotic methods to facilitate mind-brain change to people of all ages. Additionally, they have been involved in neuroscience for 15 years and have been integrating it into treatments and helping to bring the most recent research findings to practitioners. They present seminars at professional conferences, state mental hospitals, university campuses and to popular and professional audiences around the world.

The Simpkins are authors of 26 books, many of them bestsellers. Their most recent book is Yoga & Mindfulness Therapy Workbook for Clinicians and Clients (PESI, 2014). Drs. Simpkins have written many books on neuroscience such as, Neuroscience for Clinicians (Springer, 2012), The Dao of Neuroscience (Norton, 2010) and Neuro-Hypnosis (Norton 2010); as well as hypnosis titles: Self-Hypnosis for Women (Radiant Dolphin press, 2004), and Effective Self-Hypnosis with CD (Radiant Dolphin Press, 2000). Their books have over 20 foreign editions and have won numerous awards.